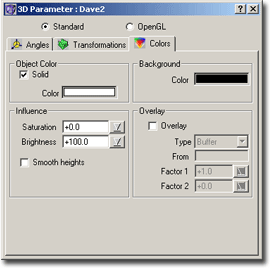 To enable overlaying you must place a check mark into the checkbox. Then you must enter the name of the other fractal, from which the information for the overlaying should be taken, i.e. the name of the fractal which should be ‘added’ to this fractal. It must specify a calculated fractal in the same folder.
There exist 4 modes for overlaying: