For beginners one of the most difficult tasks in 3D modelling programs is how to correctly position the objects. Computer programs often only work with numbers, so you have to position a camera at (x,y,z), an object at (a,b,c) with width=s and height=t. That’s not user friendly, but 3D experts know how to “imagine” the real world by these numbers.

Because ChaosPro is used mostly by non 3D-experts (perhaps fractal experts?) I decided to provide another way in order to assist in positioning camera and light sources: 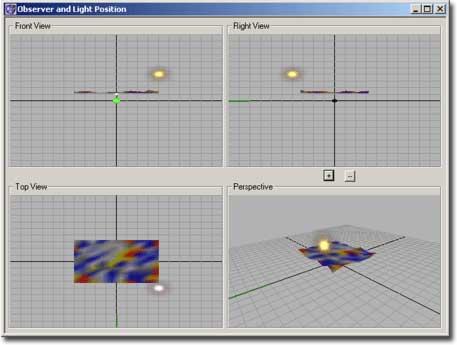 
This window offers a more intuitive way of adjusting some parameters:

First of all, there are four views: Front, Right, Top and Perspective, and they display the scene according to the name…

Now what do you see? You can see and identify …

Almost each element mentioned above can be dragged by using the mouse.

The two small buttons containing a “+” and a “-” sign allow you to zoom in or out.

And if you think that the fractal object is somewhat hiding too much, hide it by using the “Toggle” command from the context menu: Hold down the right mouse button in the perspective view and choose “Toggle Object”.