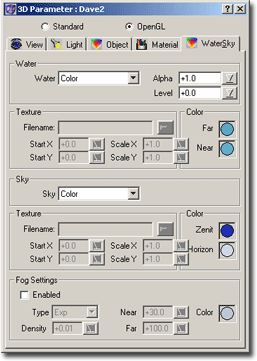 ChaosPro can add water to the scene. It does this by creating a huge sphere with the radius of the world as defined in the “Object” tab. You can place a texture onto this “water sphere” and set its transparency:

Not only can ChaosPro add some water, but also it can add a sky: Well, in fact ChaosPro does not try to create athmospheric effects: Instead, it provides a huge sphere (almost infinitely far away) and lets you place a texture on it.

The last thing which you can specify is fog: Parts of the fractal which are far away vanish slowly, giving the scene a more realistic appearance.