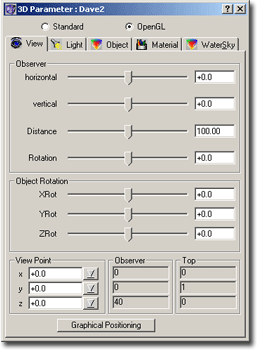 
Here you can define your camera position and orientation: You define your own position including the distance, your up-vector, and optionally an object rotation.

Now, what does this mean? Of course, better intuitive handling of the settings!
Imagine you are the observer: What do I need to know in order to perfectly define where you are? Well:

Have a look at the parameter window: You can see the observer position at the bottom of the image: There are three boxes labeled “Viewpoint”, “Observer” (read-only) and “top” (read-only). Your position (“Observer”) cannot be specified directly, instead you adjust your position intuitively by adjusting the sliders “horizontal”, “vertical” and “distance”:

Now I told you something about rotating and such, but one thing remains to be mentioned: Rotating around what? The sliders rotate not around an artificial “0″ point, no, they rotate around the viewpoint: You specify where you look at, and if you then rotate around horizontally by 45 degree, you rotate around your viewpoint in your own left-right direction by 45 degree.

The viewpoint itself is specified in real-world coordinates.

There are still three sliders labeled “Object Rotation” left to explain: Well, these three sliders let you rotate the fractal object around the world-axis. Normally you won’t use them, so make yourself familiar with all the other settings, and then play around with these sliders.

At the bottom of the window there’s a button labeled “Graphical Positioning”: If you click onto it another window will appear in which you can graphically adjust your position, viewpoint and up-vector. That window is explained in a separate chapter.

And yet another (user friendly) possibility to adjust your position needs to be mentioned: If the OpenGL mode is active and the fractal calculated, you can directly rotate in the fractal window: