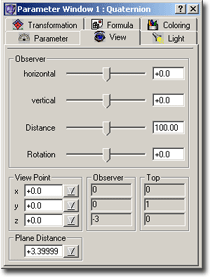 This tab lets you change all parameters of the observer, i.e. you can change the position, the orientation, etc.

Let me first describe the principle for specifying the observer position: This position cannot be changed directly. Perhaps you expected to simply specifying a 3D-point which is the position of the observer? Well, then I must disappoint you. But believe me, you won’t miss it…

Instead, when you see a quaternion, you can “rotate” around that object. This is much better and much more intuitive:

Most of the time you don’t want to specify some abstract 3D point which should be the observer position, no, most of the time you simply want to rotate the object by , say, 30 degree horizontally, because this seems to be an interesting area worth looking at.

And you can do that…

Sometimes it is desirable to know the current observer position and his orientation (i.e. where is “up”?).

So the internally maintained observer position and the vector specifying “up” are displayed (read only).

The “top” (or “up”) vector is automatically normalized, i.e. it always forms a rectangular angle between the view axis and it has length 1.